This image and the biographical text are from the book "Out of the Red Brush", by Kermit Daugherty (copyright 1954, published by The World Publishing Co., Cleveland and New York). Spelling and punctuation are as in the original book. The biography and picture are on the back cover of the jacket of the book. Unfortunately the library placed one of their inventory bar codes over the picture. 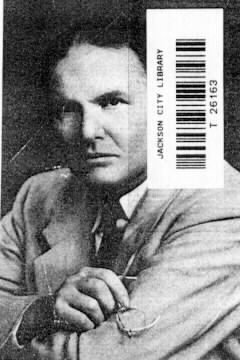 KERMIT DAUGHERTY was born in the heart of the Red Brush Country - in Hamilton township, Jackson County, Ohio - on January 13, 1904. His father's family were long-time natives of the Red Brush. Although he had had no formal schooling, his father supplemented the meager returns from his farm by teaching school - for which he received twenty-seven dollars a month for a seven month term of school. It was here that Kermit Daugherty grew up and learned to know and love the Red Brush and its people. And it was from here that he would ride the twelve long miles to the high school in Jackson, Ohio, a one-room school, ungraded and with attendance optional. When he was fourteen he went to work - cutting corn, chopping wood, doing anything he could get to do - going to school only when there was no work to be had. And somehow he managed to save enough to go to Ohio University, at Athens, Ohio.

He has been studying and teaching ever since. After one semester at Ohio University he had to go back to work again in the Red Brush. After that came another semester at the University, and then a year of teaching in a one-room school, and then long enough at Rio Grande College, Ohio, to get his B.A. in 1927. He got his M.A. later from Ohio State University in Columbus - and, in 1953, was awarded an honorary degree of Doctor of Education from Rio Grande College. In the years between he has been elementary school principal, high school principal, county superintendent of schools, and, since 1946, Superintendent of Schools in Jackson, Ohio.

Married to his wife when she was sixteen, they are the parents of three grown children. Out of the Red Brush is his first novel - as a matter of fact his first fictional writing of any kind. It was written in long hand at free moments at night in his office, and then pecked out on the typewriter. And it is a novel of which any writer would be proud, and for which all honest writers will envy him. Of it Kermit Daugherty says: "I have been steeped in the life of the tale I tell. The Red Brush way of life was mine in the formative years of youth, and in my heart it is still home."